The Spectrum of VR Headsets

In 1985, a crew of kids in Palo Alto had this radical idea of developing something the world had never seen before – technology that could create an alternate, virtual reality. At the time, the world wasn’t ready for this kind of innovation, so unfortunately their efforts died in bankruptcy. The idea, on the other hand, survived.

Now 30 years later, that dream is an actual reality. VR headsets are now available for all kinds of experiences and budgets. If you’re looking into getting off your own lawn and into a virtual battlefield, planet, or racecar, here are some of the options out there.

This is probably the cheapest VR experience available, starting at $19.95 and going up from there with different models. Once assembled, cardboard works with your Android and boom – you’ve got VR. Some of the best games are VRSE (gorgeous visuals), Sisters (terrifying), War of Words (after the BBC series), and BeerBox (hilariously simulates inebriation). Sounds like Google isn’t stopping with Cardboard however, last year they’ve invested $542 million in Magic Leap, an augmented reality startup.

But that’s just the beginning. 2016 is about to take VR to a whole new level.

Formerly called PlayStation Project Morpheus, PlayStation VR is pretty much exactly what we imagined a VR headset would look like when we were kids. In all honesty, this article may have been inspired by our getting all excited about the announcement of PlayStations VR’s games at PlayStation Experience 2015. They look ridiculously awesome. 100ft Robot Golf turns you into a, well, 100ft robot, as you stomp around cities and play golf in between towers, across rivers, over freeways. Eagle Flight goes beyond your standard flight simulator by turning you into an eagle, and Modern Zombie Taxi Co jumps on board the zombie obsession as you jump on board zombie-packed taxis. All of this madness, coming your way next year.

This badass is the reason for the new resurgence of VR attention. Developed by a 21-year-old and initially funded via Kickstarter (see, badass), Oculus is shaping up to be all we will be playing with upon its Q1 2016 release. One of the reasons we’ll be so busy with it is their partnering with Harmonix to create Rock Band VR, which honestly looks like the greatest game after the aforementioned 100ft Robot golf. Take a look at this trailer and try to tell us with a straight face you’re not itching to get your hands on a VR guitar.

Then in January, completely out of nowhere, Microsoft stomped into the VR party and surprised everyone with their announcement of an ambitious blend of virtual and augmented reality. Apparently it had secretly been under development for years, as far back as 2010. The headset HoloLens promises to deliver a variety of experiences, given its ability to illuminate images on kitchen counters, walls, whatever the surroundings by utilizing the depth camera. With that, the user will be able to watch sports games, play VR games, and see, well, holograms! Even or almost cooler is there’s no keyboard or controller  to speak of – everything is controlled by voice and gestures. The developer edition is set for release in 2016 for an unholy $3,000 – but if this thing can deliver everything it promises, sounds like it’ll be well worth it.

VR is back and the opportunity for developing games and apps has never been better. Get in on the ground floor and let us know how we can help. 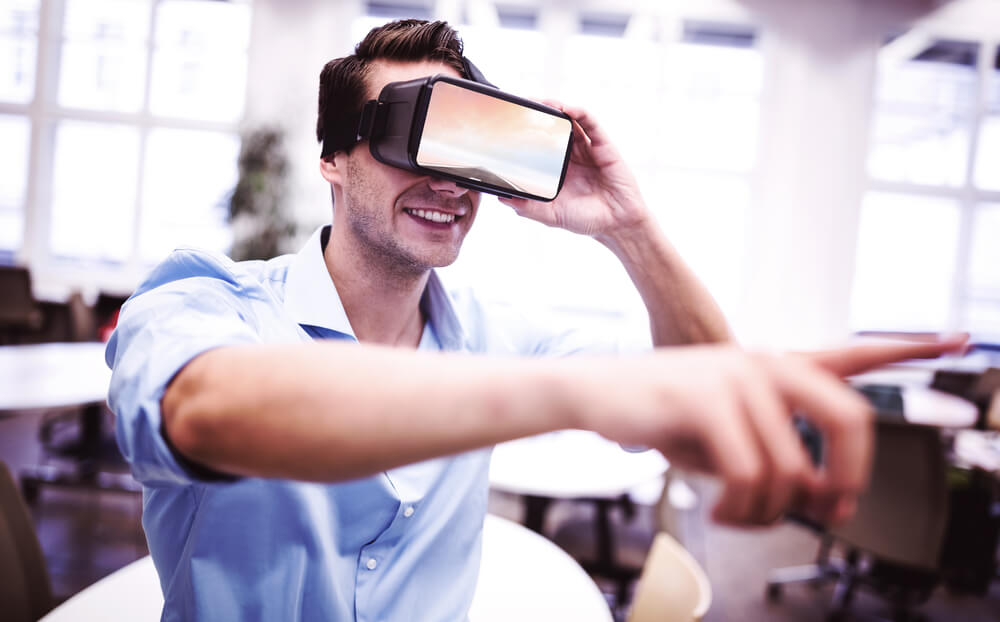 5 User Experience Challenges for VR
Virtual reality (VR) has been part of the public consciousness for decades, largely as a futuristic science-fiction concept. Over the past several years, VR technology has improved, but developers still face a number of challenges in convincing a wider audience to embrace it. Some strides have been made in VR development, but the products that exist today still have not achieved a user experience (UX) compelling enough to ensure broad public acceptance. Big Interest, Slow Adoption The Oculus Rift: Step Into the Game Kickstarter made headlines when it raised $2.4 million in 2012, showing there is considerable interest in a useful VR product. The Oculus Rift development kit and prototype helmet allowed independent developers to create their own VR video games. More than 9,500 individuals backed the project, and its success eventually led to Facebook’s acquisition of Oculus Rift for $2 billion in 2014. Oculus Rift and competitors such as PlayStation VR, Samsung Gear VR, and the HTC Vive are available as comparable consumer products now, yet public adoption has been slow. But why is this? Read on to discover the main 5 UX challenges the VR industry is facing. 1. Realistic Consumer Expectations At the 2017 Consumer Electronics Show in Las Vegas, tech experts noted a slowdown in VR innovation and the public’s tentative response. Lisa Zhao, Co-Founder of Chinese motion sensor startup LYRobotix, told CNET, "Average users, they want the perfect glasses now." Many consumers’ expectations have been set too high by fictional depictions of VR in popular culture, and these expectations are unrealistic for today’s products. "That's not how technology advances," Zhao says. Consumers are hesitant to spend considerable money on a product if they find the UX is immediately disappointing, so much work still must be done to bridge the gap. 2. User-Friendly Hardware Current VR hardware is often uncomfortable. Most commercially available VR headsets resemble bulky goggles or helmets. Complete audio-visual immersion is a key element of virtual reality, so certain design aspects may be unavoidable, but the ideal hardware should allow the user to wear it comfortably for longer than a few minutes at a time. Bringing the user’s hands into the experience is also crucial to creating an immersive UX. Facebook CEO Mark Zuckerberg recently shared photos revealing prototype gloves being tested that would likely pair with the Oculus headset. “We're working on new ways to bring your hands in virtual and augmented reality,” he wrote. The gloves would allow the user to interact with the virtual environment rather than simply watching or listening to it. The user could draw, or type on a virtual keyboard, which suggests Oculus may be looking toward practical, everyday applications for the technology beyond gaming. 3. Appealing User Interface Once the user is equipped with a satisfactory headset and gloves, they are ready to encounter the user interface. Creating a UI that consumers find appealing and intuitive rather than off-putting is one of VR’s greatest challenges. The developer must find a way to draw the user’s eye to certain places and teach the user how to interact with the program quickly and easily. The visual and audio quality also must live up to the consumer’s high expectations, which will require time and likely multiple generations of VR tech. 4. Physical Effects The user’s immersion in VR can present physical problems in the real world as well. Users who are prone to motion sickness may have difficulty staying in the virtual world for more than a few minutes at a time due to the discrepancy in perceived motion and the lack of actual motion for the body. There also may be concerns about repetitive motion injuries and other issues that could arise from using VR gear for too long. Both the hardware and software must address these issues. 5. Compelling Content Even when the users have the equipment they like and an intuitive UI to use, what are they going to do with it? Some users are drawn to video game applications and escapist entertainment, but broader acceptance will require a much wider spectrum of applications. VR could be used in any number of ways: telecommunications for home and business, education, medical applications, and any circumstance that would benefit from allowing participants to envision a particular environment they cannot access otherwise. Thoughts for the Future Ultimately, the challenge is to meet and exceed the public’s lofty expectations. VR must transcend its common perception as an expensive, high-tech toy. If enough people can be convinced of its usefulness, the potential applications are nearly limitless.
Read Article
Partner With Us
Ready to get more from your agency partner?
(619) 870-0114 [email protected]